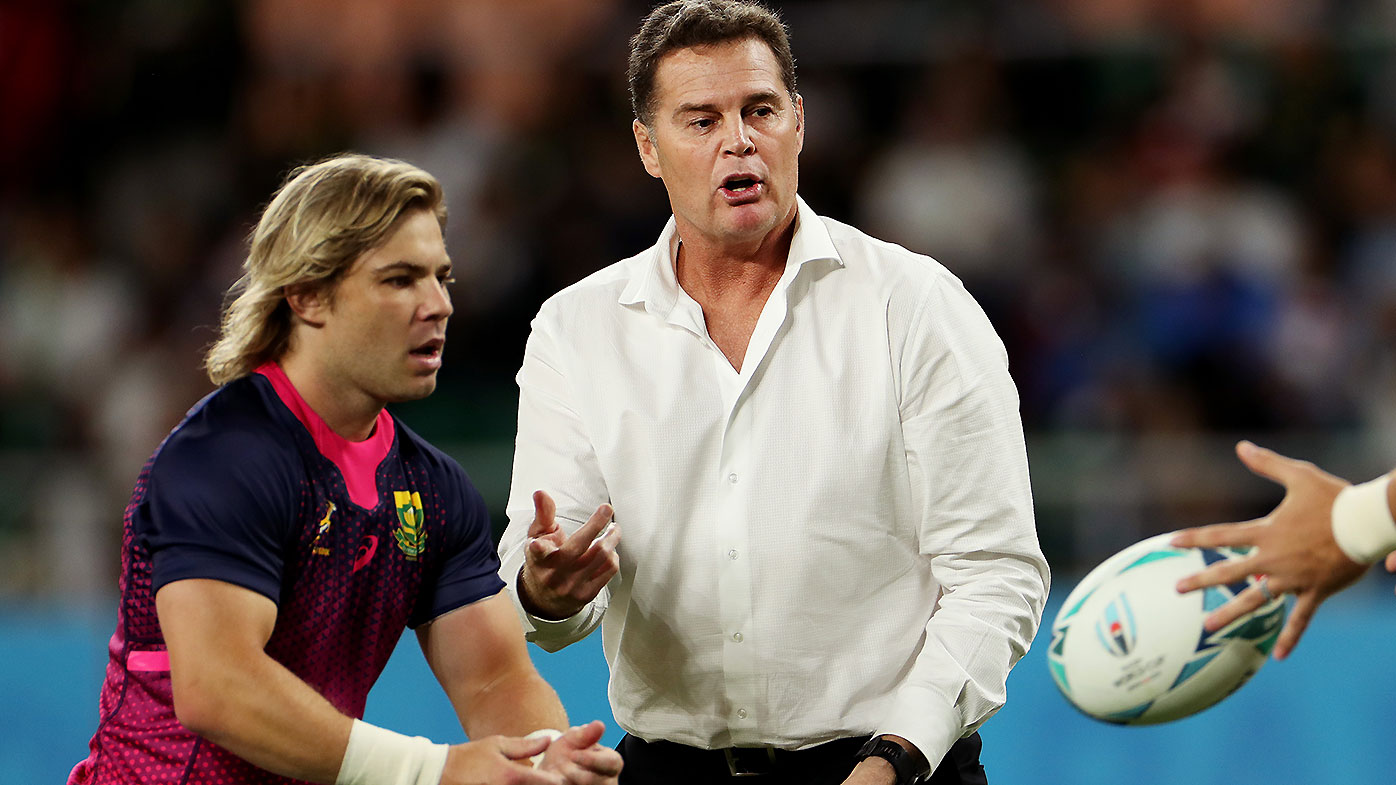 South Africa’s Rugby World Cup-winning coach Rassie Erasmus has filmed a bizarre and extraordinary video questioning the fairness of the refereeing in the series against the British and Irish Lions.

Erasmus coached the Springboks to 2019 glory and is now South Africa’s director of rugby, who acted as a ‘waterboy’ for his team during the first Test loss in Cape Town.

He released an hour-long video taking aim at Australian referee Nic Berry and his assistants while also claiming that Springboks captain Siya Kolisi was being treated differently than Lions skipper Alun Wyn Jones.

Watch the second Test between the British & Irish Lions and South Africa’s Springboks live only on Stan Sport this Sunday, August 1 from 12.30AM AEST

Erasmus went as far as to say he would step aside from his duties for the remainder of the series if it helped create, in his eyes, a more level playing field.

“If this causes that I’m not allowed to be water carrier that’s fine, I’ll step away,” Erasmus said.

“If we’re going to get a fine, I’ll step away from the management team. If this means the Springboks will get in trouble I’ll say I did this personally, because I believe in fairness, the system and two teams having an equal chance of competing in a match.”

Before the latest video, former England and Lions coach Sir Clive Woodward said Erasmus needed to leave the coaching of the Springboks to Jacques Nienaber.

“If South Africa are to stand any chance of levelling the series Rassie Erasmus must be in a suit in the stands playing no part in any match day decisions,” Woodward wrote in his latest column for the Daily Mail where he felt the lack of demarcation between the current coaching roles was “confusing and killing the Springboks.”

“There can only ever be one man in charge in match week and on match day – and that has to be the coach.”

Woodward had no doubts as to why the Lions were able to hold their nerve and wear down the Boks in the final quarter.

“I put that entirely down to their coaching dynamic. Warren Gatland and his backroom team were in a different league,” Woodward wrote.

“It is clear that Erasmus has started taking over again, he is running around in a tracksuit and donning the water carrier bib even though – as Gatland observed last week – he never seems to dispense any water, nor even carry a bottle. He never forgets his clipboard, though.

“It looked comical, it was comical, and I am surprised South African Rugby are allowing it to happen. Erasmus is still coaching the team in all but name, but that’s not his job. He needs to butt out.”

“His job now is to appoint the coaching team and let them get on with it, offering advice when asked but no more. He has become centre stage again. All the pre-match banter is conducted between him and Gatland – and Warren is eating him for breakfast.”

In team news, props Steven Kitshoff and Frans Malherbe have been promoted and rookie Jasper Wiese is also starting for South Africa in the second Test in Cape Town on Sunday (kickoff 2am AEST, buildup on Stan Sport from 12.30am).

Loosehead Kitshoff will earn his 50th Test cap and replaces Ox Nche, who has a neck injury, while tighthead prop Malherbe comes in for Trevor Nyakane.

Wiese is in at No.8 for just his second cap after debuting in the warmup game against Georgia this month.

The loose forward replaces Kwagga Smith, who drops to the bench.

The changes are in reaction to losing the first Test 22-17 after leading for the first hour.

The Springboks need a win to send the series to a decider.

The Lions could seal their first series win in South Africa in 24 years.

“This is a massive game for us,” Springboks coach Jacques Nienaber said.

“It is do or die in order to stay in the race to win the series and we selected a team that offers continuity in selection, but also that we thought would be the best suited to achieve the objectives we have set for this match.

“Ox did well in the scrums last week and has been ruled out due to injury, but fortunately we have a world-class player in Steven who can step into the starting team. The fact that this will mark his 50th Test will make this occasion even more important for him.”

Vincent Koch and Marco van Staden were brought into the reserves as South Africa returned to a 6-2 forwards-backs split which worked so well during their 2019 Rugby World Cup.

“We have had an extra week on the training field after a few disruptive weeks in the buildup to the opening Test, so we are confident that the players in the squad will be able to deliver on the physicality and grit that will be required in this match,” Nienaber added.

“We need to be better in every area of the game this week, and the set-pieces will be crucial in laying the foundations we need to execute our game plan effectively.”

England loosehead prop Vunipola impressed off the bench in the first Test win and comes in ahead of Rory Sutherland in the only change to the forwards.

Ireland halfback Murray is a straight swap with Ali Price, who drops to the bench, and Scotland centre Chris Harris comes into the Test side for the first time, in place of Elliot Daly.

Dan Biggar, who was replaced late in the first Test due to concussion, has completed his return-to-play protocol and assessment by an independent concussion consultant, and takes his place at five-eighth.

The only other player included in the matchday squad who was not part of the first Test is Wales No.8 Taulupe Faletau after he replaced Scotland flanker Hamish Watson.

“We know the Springboks will be hurting and they’ll throw everything at us on Saturday (local time), but I think there’s plenty more to come from us, too,” Lions coach Warren Gatland said.

“We feel we can go up another level from where we were in the first Test and I would expect us to improve.

“It’s the biggest game on the tour and we have to embrace the expectation that comes with it. As players and coaches, these are the games you want to be involved in. We’re relishing the opportunity to face the Springboks again on Saturday and potentially seal a series win.” – With AP