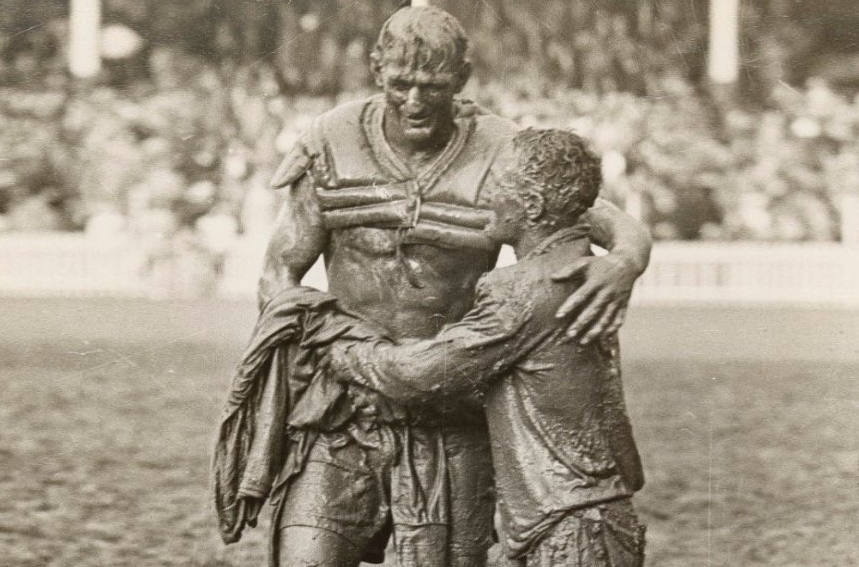 The Immortal had been battling dementia in recent years.

The Dragons confirmed Provan’s death last night and released a statement a short time ago, paying tribute to the club great.

“Norm was instrumental in St George’s great run of 11 premierships, a feat we will never see occur again.

“Everyone involved with St George District and the St George Illawarra Dragons wish to send their condolences to Norm’s family.”

“The warrior. The immortal. The legend,” he posted on Twitter.

“Vale Norm Provan. I met Norm in 2003 on the Sunshine Coast & you wouldn’t meet a truer gentleman.

“I’ll never forget shaking your hand & to this day, it’s the biggest hand I’ve ever shaken.”

Nicknamed ‘Sticks’, Provan was born in the NSW Riverina and played his junior football in the Sutherland shire.

He only joined St George after being knocked back by Eastern Suburbs at a trial. Provan made his debut for the Dragons in 1952.

The second-rower was pivotal in leading St George to their record run of premiership wins. He also played 18 Tests for Australia and 19 games for NSW.

He played in 10 of the Red V’s 11 successive grand-final victories, the last four as captain-coach.

The legend’s appearance in ten grand finals is an Australian rugby league record.

Proven was inducted in the Sport Australia Hall off Fame in 2015, and three years later was named an Immortal alongside Dave Brown, Frank Burge, Mal Meninga and Dally Messenger.

Provan’s feats were further immortalised by the NRL, with the icon and Arthur Summons captured in a famous photo dubbed “the Gladiators” that adorns the premiership trophy.

The iconic photo of a mud soaked Provan alongside Summons was taken at the SCG after the 1963 grand final.

In an interview earlier this year, master coach Wayne Bennett, who serves on the panel of judges for Immortal selection, said Provan’s achievements are unparalleled.

“I don’t know anybody in the game who did more than Norm Provan,” Bennett said.

“Our NRL premiership (the Provan-Summons trophy) is named after him.

“He played for Australia and went on to coach and he is an outstanding man. He was a superstar of his era. He epitomises what the game is about.”

“Norm Provan represents one of the most iconic figures in not just NRL but Australian sport,” he said.

“Whilst we pause in sadness at the news of his passing, we are drawn to reflect on his greatness and his wonderful contributions to the game of rugby league.

“Norm Provan’s immortality is guaranteed and his place in the history of rugby league will forever be one of legend.”