Home What's New Rod Laver believes Novak Djokovic could be adding pressure on himself by talking about Calendar Slam, says “lots of things can go wrong” for him 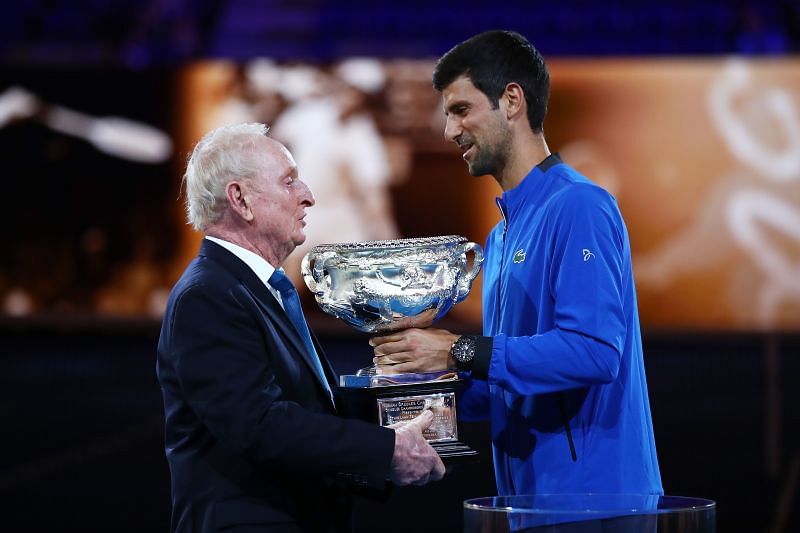 Rod Laver recently claimed Novak Djokovic is doing himself no favors by openly discussing his Calendar Slam ambitions. Laver reckons doing so could add pressure on the Serb as he attempts to pull off one of the most difficult feats in tennis.

Djokovic has won the Australian Open, the French Open and Wimbledon this year, and just needs the US Open crown to complete the set of all four Majors. If he succeeds in doing so, the 34-year-old will become the first man since Laver himself to complete the Calendar Slam.

Laver is the only man in the Open Era to have won the Calendar Slam, which he did in the year 1969. The Aussie, in fact, has achieved the feat twice; he also won all four Slams in 1962 as an amateur.

Don Budge is the only other male player in the entire history of tennis to have won the four Majors in a single calendar year.

Novak Djokovic recently mentioned that winning the Calendar Slam would be the biggest achievement of his career. That statement didn’t surprise many, given how difficult it is to sweep all four Slams in a calendar year.

Djokovic has been quite vocal about his ambitions in this regard ever since he won Wimbledon. But while speaking to the Associated Press, Rod Laver cautioned that the Serb may be inviting unnecessary pressure on himself with his methods.

According to the 11-time Slam champion, a lot “can go wrong” for the Serb even if he is well-equipped to beat all players on tour.

“I never said I was going for a Grand Slam; that’s pressure right there,” Laver said. “And Djokovic, I think he wants to talk about it, and so that could be a detriment, if there is one. He knows all the players, so there shouldn’t be any problem with [that]….I think pressure is the one thing Djokovic may find himself having problems [with]. Maybe he’s not feeling well. There’s lots of things that can go wrong.”

Rod Laver went on to add, however, that he would be pleased to welcome Novak Djokovic to the ‘club’ if he won the US Open and completed the Calendar Slam.

Rod Laver also insisted he has no qualms that the exclusive club of Calendar Slam winners could be in the process of having another addition.

Novak Djokovic doesn’t have a big serve or a big forehand or backhand, but all of them are good: Rod Laver

Novak Djokovic is widely regarded as the most complete player to have ever played the game. While his tennis may not be the aesthetically pleasing, it is almost always extremely consistent and error-free.

Many, including Rod Laver, believe that Djokovic’s game is exceptionally well-rounded, due to which he is never over-reliant on a particular shot.

“He doesn’t have a big serve or a big forehand or backhand, but all of them are good. That’s one of the things he can rely on,” Laver said. “If one isn’t working as good as it should be, then he’s got something else to lean on.”