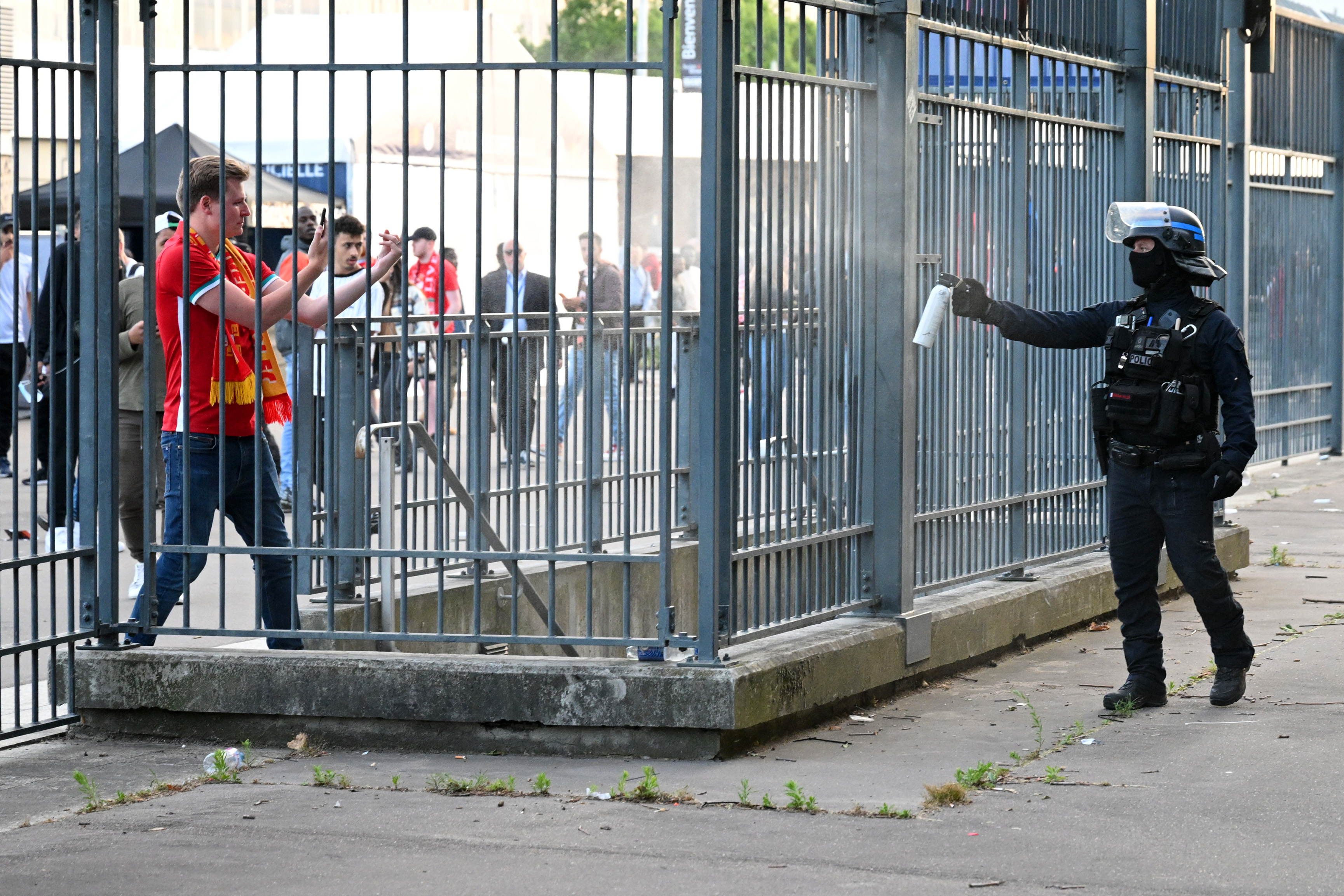 Riot police fired tear gas and pepper spray at Liverpool supporters forced to endure lengthy waits to get into the Champions League final which was delayed for 37 minutes as security struggled with frustrated crowds at the Stade de France on Sunday morning.

As Liverpool lost the showpiece game of the European season to Real Madrid 1-0, UEFA put the blame for blocked turnstiles on thousands of fans who purchased fake tickets. The competition organisers did not identify where they were from and Liverpool said it was "hugely disappointed" with the security issues experienced by its fans.

Angry Liverpool fans held in the lines were seen hanging onto railings and heard shouting: "Let us in. We've got tickets."

There were many instances of fans breaking through security and attempting to get into the stadium. The Associated Press saw two fans — one was wearing Liverpool attire — wrestled to the ground by stewards and bundled out of the gates.

Three more fans were seen evading stewards and sprinting through the concourse and into the bottom level of the stadium. Other people, wearing no obvious club attire, climbed the fences instead as Liverpool fans shouted at them to get down.

The final kicked off despite fans still trying to get through ticket checks. Fresh rounds of tear gas were fired by riot police from inside the security perimeter at people outside the fences. Police and stewards were seen falling to the ground, impacted by the eye-irritating substances.

"People started jumping the queue, then they ripped the gate open and then there was a push," Lacey said.

About 15 minutes before the scheduled kickoff of 5am (AEST) local time, an announcement was made that there would be a delay, blaming the late arrival of fans to the stadium. It was greeted by jeers inside the stadium, given those fans had already endured long queues. The game eventually started at 5.37am (AEST). "We've been stood at this gate since 6:15," Liverpool fan Angela Murphy told the AP through a fence. "I've got really bad asthma and I've been tear-gassed twice. I'm really struggling."

Asked what provoked the tear gassing, Murphy replied: "Nothing, we're stood here. There was nothing. It's just been horrendous. We have been well behaved."

Police officers with batons and riot shields ran from gate to gate to prevent pockets of fans forcing their way into the stadium without showing tickets. One policeman collapsed to the ground and had to be helped by other officers. Officers used tear gas on Liverpool fans on repeated occasions.

One Liverpool fan kissed his ticket and looked to the sky after finally getting through security.

Liverpool supporter Joe Moorcroft complained about being treated like animals.

"It's a disgrace. We've seen this before, it's a risk to health," he said. "We've seen this and it's going to happen all again. I feel it now. They threw tear gas in the fans."

UEFA said it was "sympathetic to those affected" and it announced an urgent review by French police and authorities along with the French Football Federation.

"In the lead-up to the game, the turnstiles at the Liverpool end became blocked by thousands of fans who purchased fake tickets which did not work in the turnstiles," UEFA said in a statement.

"This created a buildup of fans trying to get in. As a result, the kickoff was delayed by 35 minutes to allow as many fans as possible with genuine tickets to gain access. As numbers outside the stadium continued to build up after kickoff, the police dispersed them with tear gas and forced them away from the stadium."

"We are hugely disappointed at the stadium entry issues and breakdown of the security perimeter that Liverpool fans faced," the club said in a statement. "This is the greatest match in European football and supporters should not have to experience the scenes we have witnessed tonight."

The scenes were reminiscent of the chaos outside Wembley Stadium before the European Championship final last year. That was largely due to England fans aggressively trying to get into their home stadium for the game that Italy won.