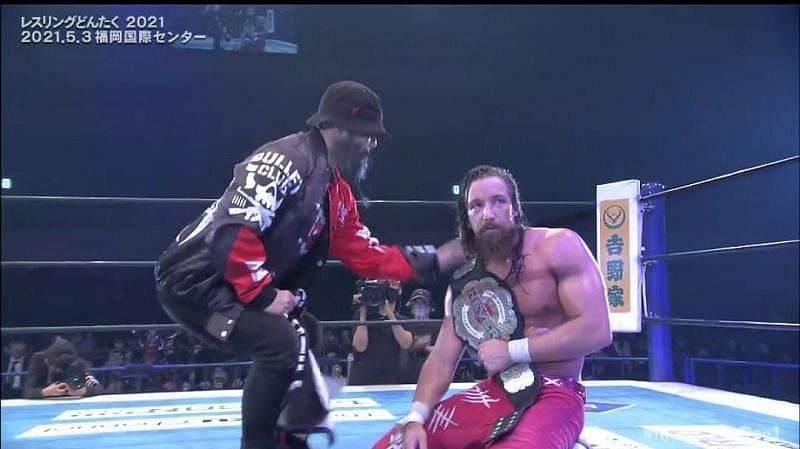 Jay White has set his sights on his arch-rival Tomohiro Ishii. At NJPW Strong: Fighting Spirit Unleashed, White was victorious over Wheeler Yuta and immediately turned his attention towards ‘The Stone Pitbull.

After his victory over Yuta, White took to the microphone and put Ishii on notice. The latter suggested he was willing to put his NEVER Openweight Championship on the line against Ishii.

The two men collided inside the ring and sparked a wild brawl. Ishii even got the upper hand over White and was about to drop the NEVER Openweight Champion. But ‘The Switchblade’ quickly turned the tables around and caught Ishii with a low blow.

This isn’t the first time White and Ishii have engaged in a brawl. The two men have developed quite a bitter rivalry with one another throughout the past few years.

Here’s the brawl between Jay White and Tomohiro Ishii:

Judging by Jay White’s antics at NJPW Strong, it now remains to be seen whether he will defend the NEVER Openweight Championship against Ishii. A title match could soon be in the making and could take place in the US as well.

Jay White won the NEVER Openweight Championship from Hiroshi Tanahashi earlier in the year. Since capturing the belt, White has made his presence known on US soil, appearing on IMPACT Wrestling and NJPW Strong.

Switchblade was responsible for recruiting IMPACT star Chris Bey into the Bullet Club and defending the NEVER Openweight Championship against David Finlay at NJPW Resurgence. With the win, White avenged his New Japan Cup loss to Finlay.

Jay White is currently part of the Autumn Attack tour. In recent weeks, he will be sharing the ring with Robbie Eagles, Fred Yehi and Daniel Garcia.

One year after his passing, we at Sportskeeda paid tribute to our very own Road Warrior Animal here.