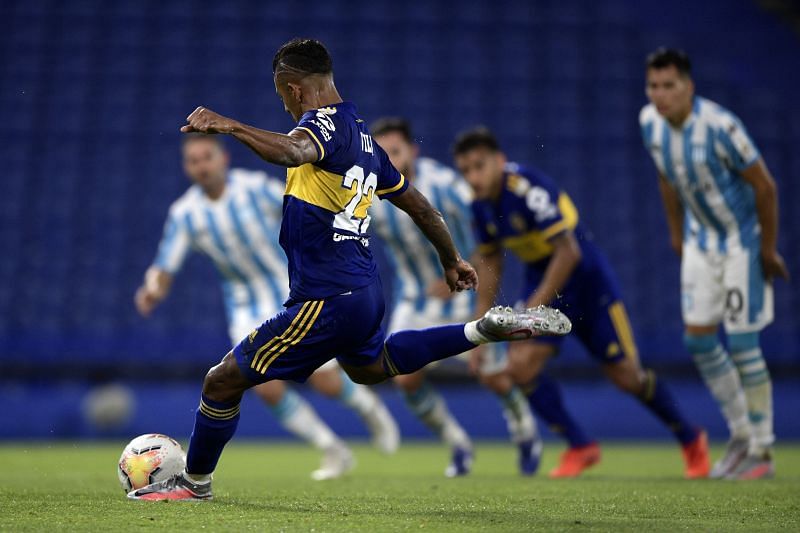 Boca Juniors host Racing Club at La Bombonera Stadium in search of their third win on the bounce in the Argentine Primera Division.

The visitors, meanwhile, will be looking to immediately return to winning ways after playing out a goalless draw against Central Cordoba.

Boca Juniors made it two wins from two games last Thursday when they claimed a 3-1 win at Platense.

With the scores level heading into the break, Diego Gonzalez and Cristian Pavon scored in the second half to condemn Platense to their fourth defeat of the season.

This followed a 1-0 win over Patronato de Paraná on home turf last Sunday. With 10 wins from eight games, Boca Juniors are currently 11th in the Primera Division table, level on points with Gudoy Cruz and Gimnasia y Esgrima.

Meanwhile, Racing Club’s charge to the top of the table experienced a slight halt as they were held to an uneventful goalless draw against Central Cordoba.

Despite seeing over 65% ball possession, Claudio Ubeda’s side were guilty of a lethargic display at the attacking end of the pitch, as they managed just two shots on target from 17 attempts.

Prior to that, Racing Club were on a two-game winning streak, beating Newell’s Old Boys and Arsenal de Sarandí.

They have picked up 15 points so far and are currently in fourth place, one point behind league leaders Estudiantes.

With 19 wins from their last 40 meetings, Boca Juniors have the upper hand in the history of this fixture. The visitors have picked up 14 wins, while seven games have ended in draws.

The visitors will be without Ignacio Galvan, Lisandro Lopez, Ivan Pillud and Ezequiel Schelotto, who have all been ruled out through injuries.

Looking at the form of both sides, we expect a thrilling and frenetic contest on Monday. However, Racing Club have been the better side in their recent meetings, claiming three wins and two draws from their last six meetings.

We predict the visitors will keep the ball rolling and claim a narrow win.